Stay informed about the latest platform features and updates in v4.35.

A large number of features and improvements are now available in the Nexd Campaign Manager. The highlights from this release:

The new sidebar will help you navigate between campaign list, creative list, and buy media setup pages. It will also allow to jump into campaign analytics and preview site.

The structure and logic:

When needed you can hide the sidebar. If your screen width is not so wide, the sidebar starts as hidden and you can open it.

You can create multiple ad sets in a buy media campaign.

Each ad set can have a separate audience, budget, period, and creatives.

You can reuse the creative in multiple ad sets, only be cautious that when making changes as the changes will be made in all ad sets. In the campaign analytics view, the same creative is shown as many times you have added it to an ad set so you can distinguish between different analytics.

To help you plan your resources when changing ad set budget then you will see the sum of all ad set budgets and campaign total budget. 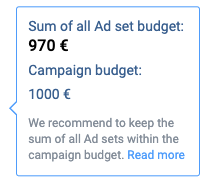 To ease understanding you can set the ad set name by just clicking on it and changing it.

When you choose creatives or try to understand what you have added to the ad set you can hover over them to see links to edit or preview them.

Each ad set will show a separate status depending on its publishing schedule:

Please note that the ad set statuses only reflect the time period and are not in line with the creative or campaign statuses that depend on how many impressions are detected.

We have successfully ended the test period for Google Ads and you can select that as a platform in the dropdown when editing creative. You will then not receive a tag, but a standalone ZIP. Please note also other changes and limitations when using Google Ads.

We added Nexd as a new platform in the dropdown when editing creative. This is also selected by default when you have buy media feature enabled. It helps you easily distinguish creatives that you run through us and those that use other DSPs. Please note that when the creative has been added into a buy media campaign, then you cannot change the platform.

When you change a creative's size that has been added into a buy media campaign you will be notified as this affects the pricing of the campaign. As a precautionary measure to stop you from doing damage to the already published creative, you cannot change published creative's categories or types.

Thanks for being updated on the latest changes in our platform, and we wish you a fruitful day 🌶