Easily create A/B experiments at the click of a button.

One of the great things about digital marketing is that, as marketers, we have a great opportunity to experiment and optimise our ads, often in real-time.

Doing so allows us to ensure that we're always getting the very best return on investment from our media spend.

By adding simple A/B test functionality directly into the NEXD Campaign Manager platform, we've made easier than ever to experiment with different versions of your creatives.

How to start A/B testing

To launch an A/B test in NEXD Campaign Manager, you need to create a campaign containing at least two creatives. You can do this either by manually populating two creatives, or by duplicating the first creative, as below.

Once you have your creatives, it's simply a case of selecting the two you want to experiment with.

Next, click on the 'A/B' button at the top of the Creative Management dashboard, and the creatives will have a yellow border to show they are in an A/B relationship.

The two creatives are then merged into a single A/B test group, with a slider to allow you to choose how much traffic gets allocated to the different versions of your creative. If you want to adjust the traffic split, just move the slider and click Update. 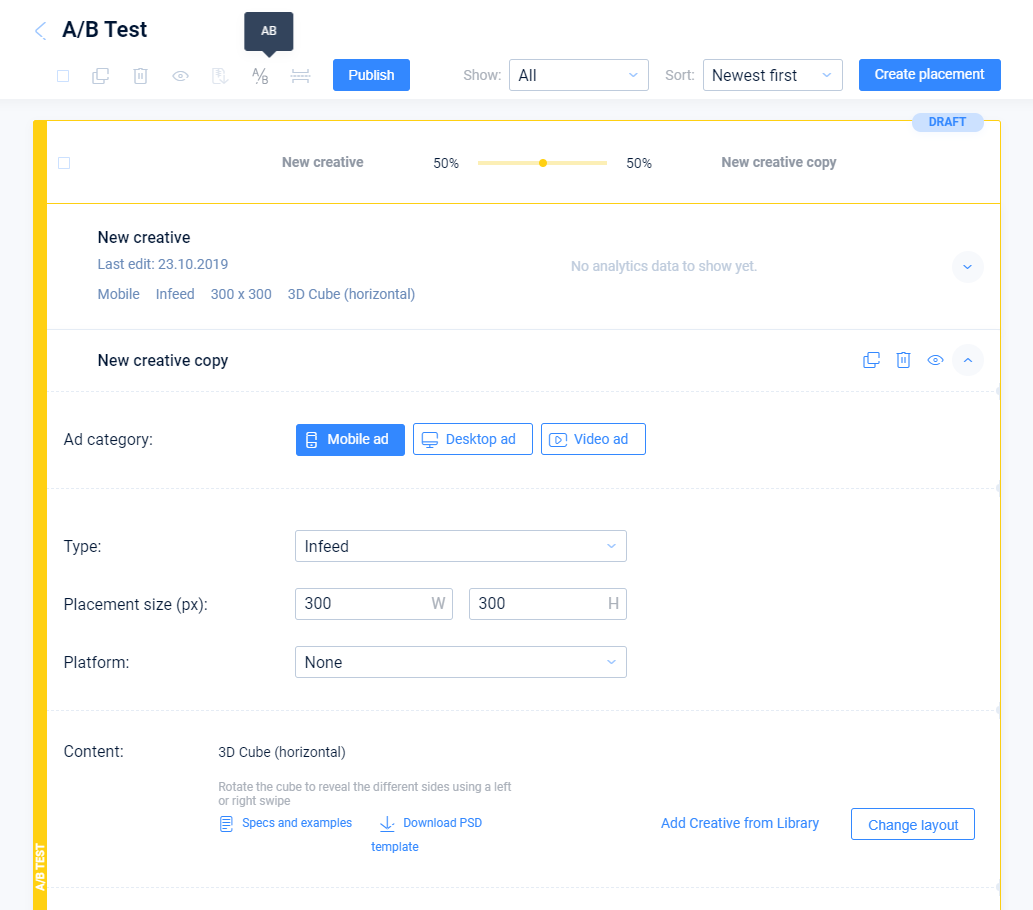 For example, if you have been running a campaign with good results for some time, but want to experiment with an updated version, perhaps with different copy, then you can allocate, say, 10% of the traffic to the new version, while the remaining 90% goes to your "control" creative.

Then, once the updated version of the ad has received enough impressions, you can check the performance in the Analytics dashboard and, if it's successful, adjust the slider so all of the traffic goes to the updated ad.

When you select 2 creatives and add them to an A/B test, they both get grouped together throughout the NEXD Campaign Manager platform: in the Creative Management dashboard, in the Analytics dashboard and, crucially, the ad tag itself.

This is important, because it means that, when you publish your A/B test, NEXD Campaign Manager outputs a single ad tag.

Once you have added the tag to your platform of choice and it's starting to receive traffic, the NEXD ad server will recognise that an A/B experiment has been created for this tag and determine which version to display, based on the traffic percentage you have selected using the slider.

All of this happens in near real-time, meaning there is zero delay in outputting the correct creative.

If you would like to knows some more about A/B testing best practice, or about how to set up your own experiments within NEXD Campaign Manager, please get in touch and NEXD's dedicated support team will be delighted to help.