If you want to use ecstatic ads you need to disable SafeFrame. Here's why you need to and how to do it.

SafeFrame is often used by publisher platforms, like Google Ad Manager (formerly DFP or DoubleClick for Publishers) as a way of isolating a creative from a page, but still allowing the publisher page to gather data from the creative itself. The SafeFrame is a kind of enhanced iFrame, per the IAB description,

In layman's terms, ads placed inside a SafeFrame will have a lot of their functionality disabled. For example, in the case of NEXD Campaign Manager, creatives based on gyro, scroll or mouse move functionality are limited to function because the ad is unable to gather sensor, page position or mouse input data because of the SafeFrame. Also, the ad may appear in different size than intended. So, if you do not want that your ecstatic ads turn into static ones, then you need to change the setting on the platform you are using. 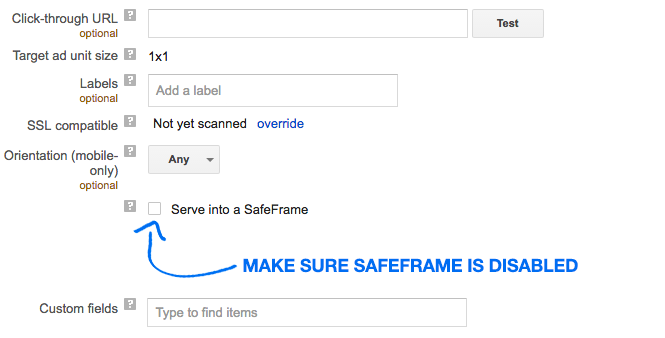 If you're not using Google Ad Manager, please reach out to your AdOps team to help resolve the issue. While NEXD Campaign Manager ads can work inside a SafeFrame, they will do so with very limited functionality. On our preview site, you can test the creative within SafeFrame. Switching on this option allows you to emulate how the ad interacts/behaves on these publishers sites.