All Collections
Frequently asked questions (FAQ)
How do we calculate engagement statistics?

How do we calculate engagement statistics?

Learn what Nexds mean by an "engaged user" and how we work it out.

Written by Erik Tammenurm
Updated over a week ago

Engagement is an important metric to help you understand how your audience is responding to your creatives.

It's possible to view engagement for your campaigns and individual creatives, giving you insights on how they're performing beyond simple CTR and impression counts.

What is an engagement?

The range of different interaction types mean that engagement is calculated differently for different layout types. Overall: engagement is a sum of all unique sessions where a user has:

Let's go through the different interactions one by one.

User can touch the ad using their finger (mobile) or a mouse (desktop). This can mean the user clicked, dragged or scratched something on the ad. This includes CTR, but we also show CTR as separate event, because it is one of the most important performance metrics. Touch does not include when user touched the ad to scroll the page (eg in mobile infeed placements).

Desktop advertisements also include a hover timer. If the user holds their mouse over the placement more than 1 second, we mark it as an engaged impression. This does not include scrolling.

When the ad has a video, we call it an engagement once at least 25% of the video length has been viewed (also known as VTR25). The video must have been in the viewport for the same time.

This metric shows how many users clicked on the ad that directed them to your landing page. This does not include clicks that interact internally with the ad (eg pausing or unmuting a video).

It's important to note that all engagement statistics are based on unique sessions.

Should the user be served the same ad again later and he/she interacts with it a second time, then that will be counted as a new engagement.

Let's take a look at an example from creative analytics page: 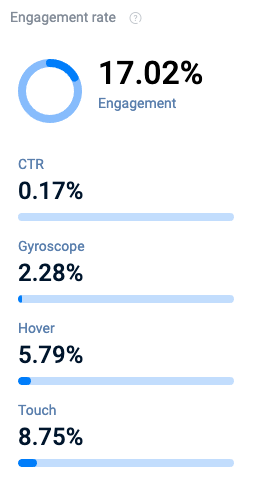 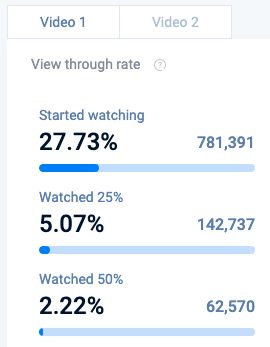 As some ads have a short autoplay video, the engagement numbers could be a bit misleading. For better understanding of what is the engagement is without video, you can select whether you want to include first quartile video viewing (VTR25%) in engagement calculation. By default, it is included. Note: we have collected data from 1st of July 2020, so you can choose this option only when the reporting date is after this date.

When you are really interested in how in detail the user interacted with your ad, you can view a large range of different events and dig deeper in the analytics.